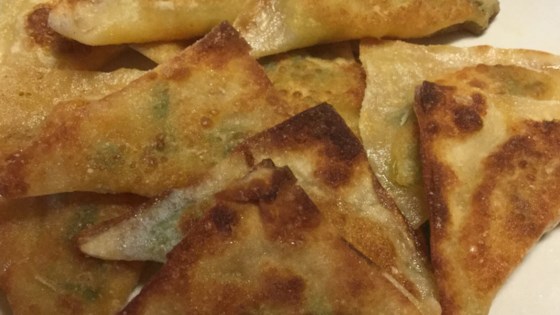 Yaki Mandu is a Korean dumpling that can be steamed or fried. They look a lot like Chinese pot-stickers. Yaki means fried in Japanese and Mandu means dumpling in Korean. They’re great for parties or as an appetizer. There’s a lot of prep in making these and they take some time, but as quick as you can fry them they’ll be gone!

Heat a large skillet over medium-high heat. Cook and stir beef in the hot skillet until browned and crumbly, 5 to 7 minutes; drain and discard grease.

Heat vegetable oil in a separate skillet over medium heat.

Crack the second egg into a bowl and beat well.

Hold 1 wonton wrapper in the palm of your hand and brush a thin layer of beaten egg on 1 edge. Scoop about 1 teaspoon beef mixture into the center of the wrapper. Fold wrapper in half, corner to corner, to make a triangle and pinch the edges shut, crimping with your fingers to make a seal. Press the air out by cupping your fingers over the dumpling in your palm and pressing lightly.

More From This Chef »

This information is per serving.